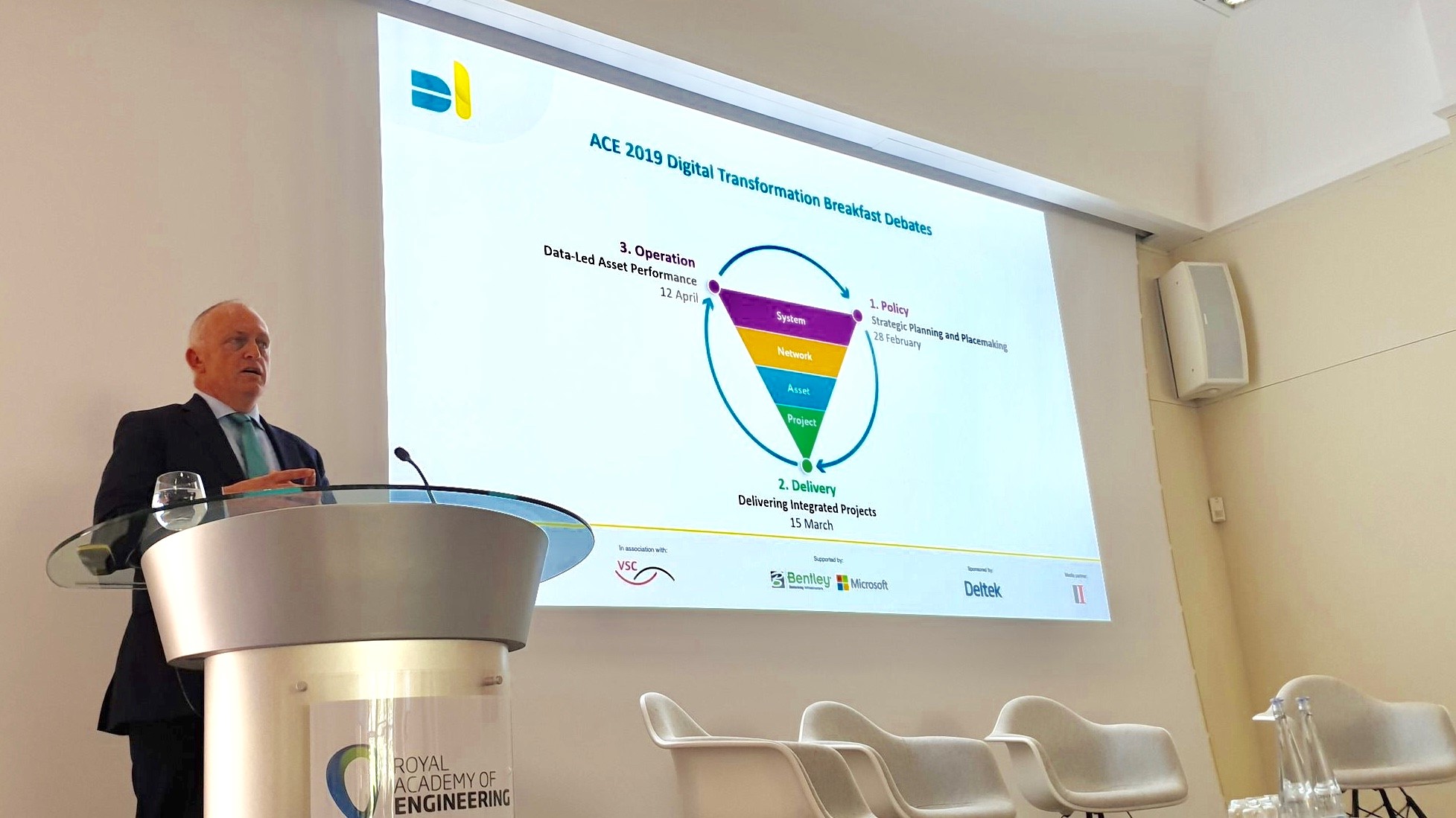 This year’s ACE Digital Leadership Conference was held at Prince Phillip House in central London on Thursday 20 June. The conference brought together senior technology leaders from across the consulting engineering sector to discuss the challenges and opportunities resulting from digital transformation.

The conference was opened by ACE Chief Executive, Hannah Vickers, followed by a keynote presentation from Mark Enzer of Mott MacDonald and the Centre for Digital Built Britain (CDBB). The first panel session focused on client needs, with Sarah Hayes of the National Infrastructure Commission and Miranda Sharp of Ordnance Survey joining Thames Tideway’s Peter Vale for a session on client evolution.

In the second session of the day, Scott Communications‘ co-founder and director Tony Scott took delegates through the outputs of the ACE Digital Transformation Group roundtable debates that were held in the spring. Each of the debates focused on one of the three thematic areas of ACE’s 2019 Future of Consultancy initiative:

‘It is essential we embrace a digital approach that supports strategic enablers such as the adoption of collaborative procurement methods, machine readable information requirements and standardisation of processes. Even if our sector is historically slow in digitalisation and automation, new players are entering the market and the speed of digital transformation might radically change. Events such as the ACE Digital Leadership Conference and collaborative roundtables are key to shaping the future of consultancy.’

‘Having taken part in all three of the spring debates as an independent consultant, it was a privilege being able to replay their key findings to the conference audience. The AEC industry is going through major digital transformation today. It is fascinating seeing the degree to which each of the companies within it, from SMEs to the very large, is seizing the opportunities this presents. Scott Communications is very happy to be supporting ACE and its aspirations for its members and the wider industry through these exciting times.’

The day continued with further engaging sessions focused on digital leadership, and concluded with a networking reception in the evening. 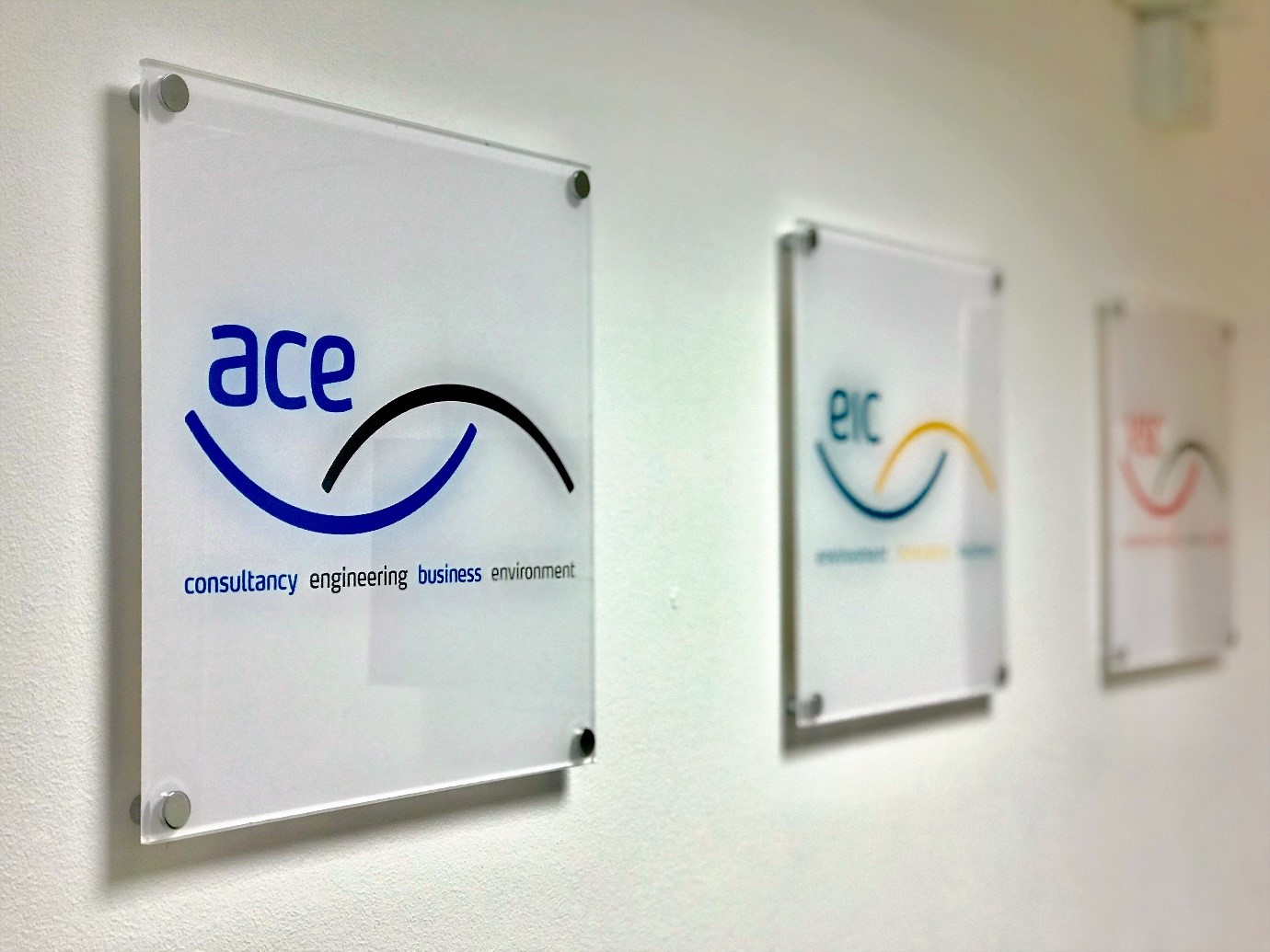 Scott Communications’ co-founder and director Tony Scott is pleased to have been appointed as an independent consultant and adviser to support the Digital Leadership strand of Association for Consultancy and Engineering’s (ACE) ‘Future of Consultancy’ campaign.

ACE chief executive Hannah Vickers announced the campaign in November 2018, sharing her vision of helping the entire consultancy and engineering sector welcome a new era of design and delivery in the built environment. In a warmly received speech at ACE’s 2018 European CEO Conference, Hannah outlined the disruptive influences of new technology and highlighted the further step-changes that digitally enabled manufacturing, whole-life asset performance, big data and artificial intelligence (AI) would bring in the future.

Tony, a founding member of ACE’s recently formed Digital Transformation Group, is supporting a series of roundtable breakfast debates for consultancy and engineering digital leaders at the Institute of Directors in Pall Mall, London.

The first debate was held on 28th February and focused on ‘Strategic Planning and Placemaking’. The second breakfast debate on 15th March will address ‘Delivering Integrated Projects’, with attendees at the final breakfast on 12th April debating the topic of ‘Data-Led Asset Performance’.

Tony will be participating in the three debates and consolidating their collective output to feed into ACE’s Digital Leadership Conference at the Royal Academy of Engineering, Prince Philip House, in London on 20th June.

‘Having chaired the organising panel for ACE’s inaugural European CIO Conference in 2017 and supported the organising and running of the 2018 conference, I am thrilled to have been invited to participate in the planning and build-up for this year’s Digital Leadership Conference, the successor to the CIO Conference. With the disruptive impact of emerging technology already being felt, I encourage digital leaders across the consultancy and engineering sector to put 20th June 2019 in their diaries now.’

‘We’re happy that Tony has agreed to support the digital strand of our Future of Consultancy campaign this year. His industry knowledge and extensive network of contacts will help us to shape up this campaign and feed into our Digital Leadership Conference on 20th June.’

More information about ACE’s ‘Future of Consultancy’ campaign is available at: